So here we are, six months into the year with the Agg down—10.35% (more than three times the losses of all of 1994) and the S&P 500 down -20%. The hangover from 13 years of outrageous financial asset returns relative to the real economy and labor has now exceeded the clinical definition of a migraine. 60/40 portfolios are down around -16% YTD. Strategies that protect capital and grind out a consistent return should be chased like an oasis in the desert!

After being scolded for such a deep level of naïveté at considering such an outcome, answers to that question would certainly have been much higher than 3% and change since the last time inflation was so high, the 10-year traded at yields north of 8%. Be careful averaging down into duration especially since most investors still arguably have way too much duration already in an environment like this.

The one conceivable environment where one could conclude that yields have already peaked is if the U.S. economy is on the brink of entering a deep recession. So yes, no more duration pain for the 40 (fixed income), but an immense amount of pain in store for the 60 (equities). We’re not quite sure how that would be a victory for most investors. Lastly, if yields have indeed peaked, that may be the most tragic outcome of all for fixed income investors since there clearly is still not enough income in high quality fixed income markets to achieve investors asset allocation goals.

Locally, the CMBS market has ground to a halt, banks are going from extra cautious to hyper cautious, and many private lenders are temporarily tapped out in terms of lending capability. Thus, we have a window over the summer where we can lend to trophy properties in great locations at higher spreads and lower LTVs.

The only caveat to the previous three statements is that acquisition and financing activity has slowed down significantly relatively early this year, which means there could also be fewer opportunities to put capital to work.

In the meanwhile, opportunity arises for one to “high five the Fed” as rates go higher and access favorable yield.

Assets trading at a discount to NAV also provide positive convexity to an improving market environment and lower risk of loss in the event of a recession.

Unfortunately, the economic and market environment remain tricky to say the least. Fight inertia and take advantage of alternative strategies that can potentially better navigate an environment remarkably similar to the dotcom bubble collapse with some 1970s style inflation thrown in to drive the galactic mean reversion between financial assets, the real economy and labor…the time for alts is now. 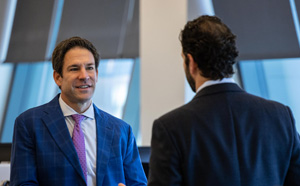 The 60/40 is toast as the galactic mean reversion continues!

Markets making you dizzy? Alts may keep you steady!